Click for larger image.
In our PE class, we are learning how to do jump rope. It seems like it's really easy, but it is much more complicated than that. There are many more tricks we get to learn in doing this lesson. One trick is called a side-winder. When you do that, you jump 2 regular jumps, and then swing the rope in front of you from side-to-side, then jump 2 regular jumps again. Another trick is called criss-cross. What you would do for this one is jump once or twice, and then cross your arms where it is elbow over elbow. Then you jump through, and do regular jumps again, until you want to spice it up with some criss-cross jumps. A final trick is the double jump. This is really hard for me, but my friend can pull it off very easily (she did 15 in a row!!). You jump a couple times, and then swing the rope twice as fast, and only jump once. It's a really hard trick, but I think it is worth it to learn.
Doing this unit in PE has really increased my knowledge, and I am glad that we did this. When my sister did all her fancy tricks at home, I was left jumping regular jumps, and she was doing really hard and amazing things. I am glad that I finally knew the secrets behind doing those tricks, and it was fun to learn them.
This PE project relates to dance, because when you dance, you do tricks, and you have to be very coordinated, and it can be very hard. In our class, we also made routines, and in dance you also have routines. I liked doing this jump rope project, and I hope we can do another project like this again.

Click for larger image.
To accomplish doing a forward roll, you first have to get in the position like you do in a forward roll. First, you squat down, and tuck your chin, and rock back and forth, like you do in a forward roll. Then, when you are ready, you push yourself up and over. This portrays a successful backwards roll. This move connects to the forwards somersault, since they both have the same starting position, and they both roll over, but in different ways.

Click for larger image.
This picture shows us the structure of a forwards somersault. First, as shown in photo 'a,' we squat in that position. The thing that is not shown on photo 'a,' is to tuck your chin underneath your arms, which will be better for a roll. Then, in that position, as shown in photo 'b,' you rock back and forth, and then, push yourself over, and roll your legs back up as shown in photo 'c,' then push yourself back up in a sitting position, like photo 'd' and 'e.' After doing this, you have successfully done a frowards somersault. This connects on how to do a backwards roll, since the starting positions are the same. 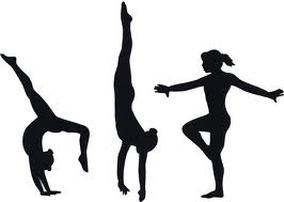 Click for larger image.
Gymnastics was something I always loved to watch during the olympics. When I first heard that we were starting the gymnastics unit in P.E., I was very scared, because I was never able to do gymnastics. In fact, I broke my arm while trying to do gymnastics. I tried to balance myself on a balance beam, that was pretty high, and I fell off the beam, and broke my arm, so I was a little scared about doing gymnastics in the class. Then, when we got started with forward and backward rolls, I thought that would be pretty easy, and it was, it wasn't too hard. Then, we got to the pikes, which was a forward roll, without bending your legs. I wasn't too good at that, but I got better with practice. We are now in the unit of cartwheels, getting into the unit of handstands. Doing the cartwheel was a little hard, but with Ms. Pope's help, I was able to do them well. Then, we got onto round-offs, where you would do a cartwheel forward, and then turn to face where you started. I'm not really that good at those, but I am making progress. Starting on the handstands, we have to get into a frog position, where you put your arms with elbows facing up, and put your legs on top. If you push on your arms with your legs, you will do a handstand. I am finding out that not only watching gymnastics is fun, but participating in it is a really great, and fun activity to do! 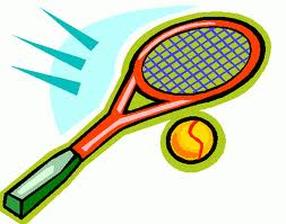 Click for larger image.
I really love tennis, and I mean that. I really admired it always. I was an expert at the Wii Sports one, the game said that itself, but I wasn't too sure about the real tennis. When we were learning how to play it in P.E. class, my partner and I thought it was going to be super easy, but then, we really weren't that good at it. Then, we kept on practicing again and again, and we got alot better at playing tennis against other people. Once, we had to play against a really good team, and we won the game against them. My friend and I are really excited for the tennis team in fourth quarter, because we are definitely going to join! Tennis relates to our badminton unit we did, since they both have a racket, a net, and the same hitting style. For example, if you were on the right side of the court, you would have to hit over diagonally to the left side on the other side of the court. This goes the same for tennis, and badminton.

Click for larger image.
Our first sport in P.E. was badminton. It was really difficult to me, in my opinion, since I didn't  know how to play badminton at all. Whenever I tried to hit it over the net, the birdie sometimes made it over, and sometimes didn't. We learned that we had to serve to other court on the diagonal side from us. Finally, I started to get the hang of how we had to serve, and play for the unit. It was a little hard at first, but I kept trying, and getting help from my partner, that I got way better at it. This badminton unit that we did relates a lot to our tennis unit, since we use the same way of how to play.